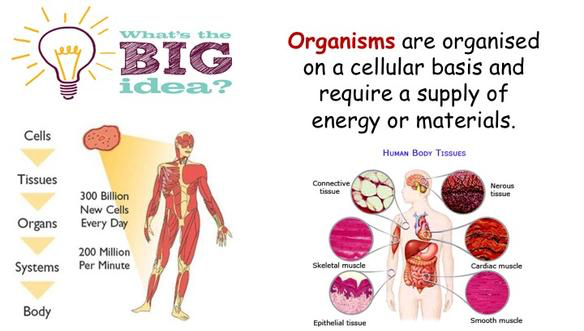 The Big Idea – Organisms are organised on a cellular basis and require a supply of energy or materials.

You need to learn the parts of the breathing system and that breathing is controlled by the diaphragm moving up and down. As it moves down it decreases the pressure (more space for the air to fill) and air rushes into the lungs to fill the extra space. As the diaphragm move up the opposite happens

The alveoli are tiny sacs of lung tissue that connect the lungs to the blood supply. Alveoli are adapted to help exchange gases by having a LARGE SURFACE AREA and a THIN CELL WALL. Their function is to exchange the gases needed for and produced by RESPIRATION

Respiration is the process used by cells to provide energy.

Aerobic respiration uses oxygen and glucose (from the digestive system) to make energy and waste Carbon Dioxide which is transported back to the lungs.

In Humans we can make energy for short periods of time without oxygen. This is anaerobic respiration but this produces lactic acid which causes us pain ( a stitch when running) and we must switch back to using oxygen.

Some microbes such as yeast can use anaerobic respiration all the time and produce alcohol. 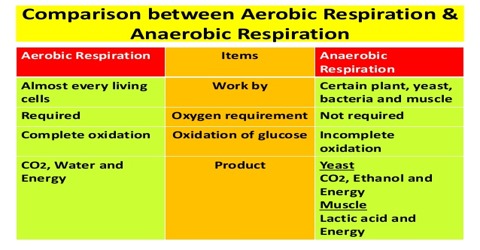 Review and Rate your Understanding

Explain the difference between breathing and Respiration

Explain the difference between aerobic and anaerobic respiration

List the parts of the breathing system in order

Name the gases exchanged by the alveoli

Have you learnt all the facts on the 100% sheet?

Have you completed the BBC Bitesize tutorial?

Have you been able to complete all the questions on the 100% sheet?

Let us know how you feel about this topic in the comments section below. Any questions you have, just ask.

This site uses Akismet to reduce spam. Learn how your comment data is processed.